This is my first opportunity to post since Food Allergy Awareness Week.  My boy has had a busy month!

We attended a Kyle Dine concert hosted by the Austin Families with Food Allergies and as the PR volunteer – I was busy snapping photos.  I didn’t realize that the NPR/ KUT Austin crew who were there to interview, snapped a shot of the boy!  I received a call from a friend travelling in Iowa.  She’d gone to NPR’s website and was tickled to see the kid’s face on their homepage.  I must admit…so was I!

Then, there’s the 3rd Annual Food Allergy Retreat.  Instead of the usual 6 and under obstacle courses, my bravehearted 5 year old was persistent on going with the 6 and up crowd.  He wanted to hang out with his 9 year old buddy, Noah.  – AND to our dismay, climbed a 40 foot rock wall and ziplined for the first time! 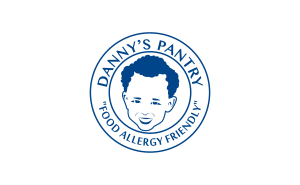 We’re collecting non-persishable food items FREE of the top 8 food allergens.  I was inspired 3 years ago, as I read an article in Living Without Magazine titled, “Special Diet Pantries.”  It made me think about the food insecure and families with food allergies right here in the Austin community.  We’re currently in the phase of collecting food, but also collecting donations via the Austin Community Foundation.

We also received news coverage during Food Allergy Awareness Week – with a little help from our allergist and friend, Dr. Allen Lieberman at the Asthma and Allergy Center of Austin.  Here “he” is again!

If I include our Houston trip and the Austin parks we frequented – It was March ALL OVER AGAIN!!!!!!  Fun and exhausting.

Earlier this month we attended the annual Food Allergy Retreat at Peaceable Kingdom hosted every year by the Austin Families with Food Allergies.   It’s always a treat to connect with other families with food allergies within the community.   Every year our son has enjoyed the kiddie obstacle courses, theater, archery, arcade room and other amenities. This year was different.

Instead of our usual routine of connecting with the 5 and under crowd – the kid asked if he could join the “BIG BOY” group.  Initially, I was a little hesitant…but, realized my bravehearted son has always been FEARLESS.  So, I asked a staff member if we could give it a try and the rest, shall we say, is history!

Looking up at the rock wall before climbing, FOCUSED! 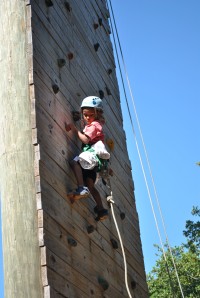 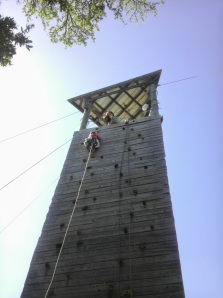 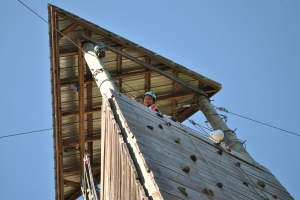 The kid climbing the 40 foot rock wall to get to the 175 foot zip line.

Video of of the kid zip lining. He had a a blast! 🙂